What’s it take to build a dynasty?
A good friend, Sarah or “Ms. Reck” to her students, directed her final band concert last Thursday after 32 years of teaching. She was a maestro at building a talent hotbed, a place where great talent is disproportionately concentrated. Cultivated over time, talent hotbeds can grow into dynasties.

Her mastery applies far beyond teaching…so pay attention students!
Sarah reluctantly agreed to let me write about her work so we can all learn. Confession: To get her agreement, I might have failed to mention I’d use the words “talent hotbed” and “dynasty.”  Forgive me, Ms. Reck! 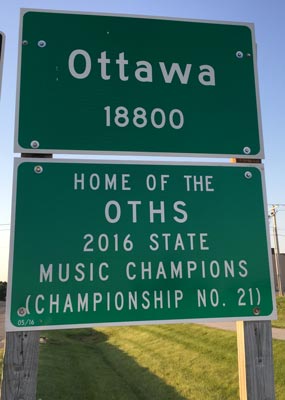 Get this! The combined OTHS bands and choirs swept the Illinois Music Sweepstakes 20 years in a row, winning 21 times in total. To put that in perspective:

Sit up straight and let this teacher school us, today.
I’ve marveled at Sarah’s success for years. But during her final concert, as her current and former students stepped to the mic to share their experiences, they gave us a peek into her approach.

How well do you do these things as a leader?

Her students offered great insights into how to create an impact much bigger than yourself. Look in the mirror in these areas.

Ms. Reck was a teacher first. The goal was to get students to produce the best possible music, and she made it her job that they learned how — including asking for help from other pros to achieve that goal. No one said she didn’t like being first! Winning was just the cherry on top.

The moral of the story: Dynasty builders focus on making others great. You can create a flash in the pan if you try to be the hero and save the day, personally. You create a talent hotbed by making everyone around you exceptionally strong. If you do it for years, you build a dynasty.

Three moves she made to help others be strong were:

I pity the poor school who wants to unseat OTHS.
By focusing on the right things year after year, they’ve made themselves tough to touch.

Building a dynasty wasn’t the goal. It was the result of years of great leadership and great work.

What about you? How are you building a talent hotbed?

Please share below…Who is the maestro you emulate and how?