On Sunday, January 16, 2000 in Santiago, Chile, I learned a lesson about freedom no textbook could ever teach. Mostly, I learned about my own ignorance.

I sat on a park bench by a river enjoying summertime in January. Fathers and sons kicked futbols back and forth, and young couples sought time alone.

It was a tranquil Sunday, until suddenly it wasn’t.
I heard car horns blaring on the street up the hill from us. I assumed it was a wedding or a family celebration.

The honking grew louder and more persistent. Curiosity coaxed me out of my comfortable seat to walk up the hill to the street. 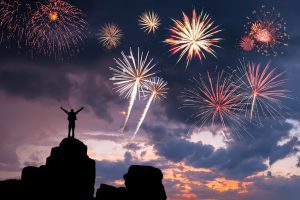 It took me a minute to figure out what was happening.
Then I remembered it was the runoff Presidential election that day. Obviously, the victor had been declared. Supporters were flooding the streets on foot and in cars.

At the stoplight in front of me, a street vendor was wading through the honking cars, selling miniature Chilean flags-on-a-stick. When the light turned green, the party sped down the street until the next wave of celebrating cars approached.

Thousands of cars made loops around the old city square past the Presidential Palace again and again.

That’s when my ignorance smacked me in the face.
I’d never seen or participated in a celebration for President this massive. It seemed odd. Was this just how passionate Latin Americans expressed themselves?

Is newly earned freedom the sweetest of all?
Then I began to recall the stories of some of my Chilean friends who had fled Chile for their lives and their families’ after the Pinochet Regime coup d’etat in 1973. During his reign, speaking out against the President could mean torture or death.

Many of the Chileans I knew never had the opportunity to legitimately vote for President until they were in their 30’s or 40’s.

Now, the celebration made sense to me.
At the same time, I recognized how I’d taken for granted my own freedom. That recognition made the celebration even more meaningful to me. How lucky am I!

I began to traverse the city to witness this celebration, grateful for what I’d taken for granted.

I squandered my freedom, daily.
A few years ago, I experienced a life crisis that brought me to my knees. Problems in my marriage, conflicts with friends, sobering awareness that some big personal dreams wouldn’t happen. It was a long, dreadful list.

With the help of some wise friends and mentors, I realized that every problem I had was self-imposed by artificial limits I’d placed on myself.

I had the freedom, I’d wanted. I just never exercised it.
I was the architect of my own despair. There was no military dictator I could blame.

Fortunately, I didn’t stay stuck.
Now, just because I can, I daily challenge myself to bust old barriers that I’ve created. That’s one reason I write this blog. I’d always wanted to support people this way, but was waiting for someone to tell me I could.

So what about you?
In honor of Independence Day, won’t you ask yourself what freedoms you’re denying yourself? If you can’t see it, ask someone who loves you for their honest and kind opinion. How are you denying your own freedom – to act, to express, to feel, to become, to have? Will you be the dictator or the liberator?

Freedom is a celebration in itself. Just ask those people in Santiago.

Please leave a comment. What freedom do you value the most?