We live in a world that’s always looking for the next hot idea. So when an idea lasts 71 years, there must be something to it. Could it guide your 2018?

This idea is hidden in an old movie.
Yes, the movie has a happy ending, but that’s not why it remains popular.

People often overlook the timeless idea it carries. You can apply the idea in 2018 to be the most relevant person in the room — while feeling happy and whole.

If you turned on your TV in December, you had many opportunities to view the movie It’s a Wonderful Life. If you’re not familiar with the story, here’s a quick synopsis in italics. Just skip it if you already know the story. 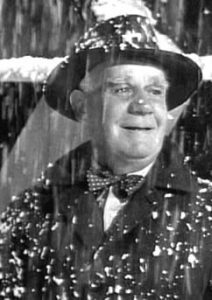 George Bailey grew up in a small town, forever dreaming of seeing the world and doing big things. But George didn’t get to live the life he wanted to live. Because of family obligations and health problems, he was stuck in his god-forsaken, hometown while friends and family went away to find adventure. He did good work along the way, but he wasn’t doing what he really wanted.

About 30 minutes into the movie, George experiences a crisis where he believes his only option is to end his life. (It sounds extreme here, but it makes sense if you’re watching the movie.)

George stands on a bridge over a rushing, frigid river thinking about jumping. Suddenly he sees a man drowning in the river beneath him, screaming for help. George immediately jumps into the river and saves the man.

The drowning man is an awkward but lovable angel named Clarence who was sent to earth to help George see that his life is actually worth living. You’ll have to watch the rest of the movie to see how it ends, but I’m not afraid to admit that I cry EVERY time I watch it.

Why do people keep watching this movie?
There are so many reasons not to watch it.

It’s the subtext that hooks us.
George is at the end of his rope — and we all know that terrible feeling of lost hope.

He’s ready to give up completely. For George, dying seems a better option than living.

That’s when Clarence introduces the theme that will be repeated throughout the movie: when you think your life couldn’t be worse, find someone else who needs help, and pour yourself fully into supporting them.

When George wanted to end it all, Clarence knew exactly what to do to help him. He forced George to deal with a drowning man. (Do not attempt this at home.)

George had to shift his attention from what was terribly wrong with HIS life to how he could help another person with THEIRS.

Our brains are wired to feel empathy.
Because you feel empathy, you can understand why George risked his life to save Clarence. Empathy will even cause strangers to help strangers like we saw many heroes do in the natural disasters of the past year.

Your generosity isn’t a one-way street.
Just ask George. When you shift your attention from how terrible and meaningless your life is to supporting someone nearby, everything changes.

At first, George felt greatly inconvenienced by helping Clarence, and you may have felt that, too. But his outlook had already begun to expand.

You can’t help but change your perspective when you offer someone your sincere support.

The rest of the movie is devoted to showing George how his small acts of service over the years created big changes in people’s lives. They had changed his life, also.

It works in high stakes situations, too.
A friend of mine, Lt. Col Scott Mann, Green Beret (retired) was invited to speak at an elite warrior race. In this event, otherwise sane men and women willingly subjected themselves to two days of intense physical, mental, and emotional challenges with no sleep.

It’s REALLY hard. The typical drop out rate for this event is over 50%.

Early in the event, Scott offered them one piece of wisdom he learned in Special Forces: “When you’re feeling completely exhausted and ready to quit, turn to the man or woman next to you and ask them, ‘how are you doing?’ and then take care of them.”

Participants took his words of advice to heart. Every time one of them was ready to quit, they turned to their neighbor to check in and offer support.

NOT ONE person dropped out of the race.
In fact, the organizers extended the event by several hours adding more intense challenges trying to get someone to quit. In their great suffering, people kept turning to their neighbors and offering support. No one would give up.

Finally, the organizers had to give up.

Every person went far beyond their individual performance because they’d put their focus on propping up the people around them.

It’s an old lesson.
A great spiritual master was once asked by a student who was suffering, “Teacher, I feel so terrible. What can I do to feel better?” The teacher’s immediate reply was (paraphrased) “Find someone else who is suffering more than you are and help them.”

Still skeptical? Let science explain it.
Your limbic brain, aka, mammalian brain, is wired to make connections with other people and things. This connection can cause you to want to help someone in need.

This instinct helped primitive humans and other mammals bond to survive together in threatening conditions that solo players would have surely died in.

The limbic brain is where you feel emotions, so it gets a bad rap from some people who say it’s too primitive, too emotional. They claim those feelings get in the way of good decision making. But it’s those emotions that saved George and all of those people in the warrior run.

(As an aside, do you know what they call people who believe emotions get in the way of good decisions? Bad leaders. But I digress…)

The need in each of us to have a purpose greater than yourself is so strong that it can snap you out of the funk you’re in.

A drowning Clarence snapped George out of his funk. Elite warriors rely on it to keep going when they’re exhausted and losing hope. Spiritual masters have been teaching this as a path to fulfillment for millennia. Even modern brain scientists will tell you it works.

How can you apply this in 2018?
You probably have some audacious goals you plan to achieve this year.

If they’re really audacious. you already know that you’re going to face daunting challenges along the way. If it was easy, someone else would have already done it.

You’re going to get discouraged.
Things may get so bad that you want to quit. Or at the very least, you’re going to fall into a funk as things get difficult.

What will you do when things get really bad?
How about turning to someone nearby and asking them, “How are you doing? How can I help you right now?”

Could you make this your practice in 2018?

If you make this a habit this year, count on three things:

But otherwise, no big deal.