Underdogs: sometimes it’s not just a metaphor.
A few weeks ago, our dog, Lulu, got puppy-shamed…if there is such a thing. Don’t worry. She’s still as joyful as ever.

But the incident actually says as much about the leaders around you (and about you) as it says about dogs. It serves as a humorous but cautionary tale of how we unintentionally squelch each others’ voices. This one’s not immediately obvious, so it’s a 201 level idea.

Understanding what happened to Lulu will help you better take life by the leash and build your leadership pedigree. (Sorry, but when a puppy pun presents itself, you have to grab it by the collar.) 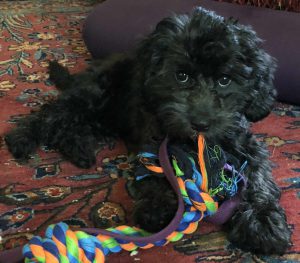 She thought it was just a walk in the park.
It was a sunny day as Brenda walked 13-month old Lulu through a park near our home.

The sun brought out many people and animals, which was good news for Lulu. She’s a 20-pound fur-ball that I call the neighborhood greeter. Lulu rushes to greet every dog, person, squirrel, bird, or lizard she encounters.

Among the many people on the grass, Lulu spied her former dog trainer. Let’s call him Fred.

Lulu loves Fred!
In fact, the mutual adoration was so great that when Fred got his own pup, Fido, he suggested our two small dogs would enjoy playing together. We just had to schedule a playdate.

Fred was training another pup when Lulu saw him that day. She excitedly started pulling her leash toward Fred and his puppy-trainee to greet them. When the pup also started excitedly bounding toward Lulu, Lulu paused for a moment to assess the ball of energy shooting her way.

Fred makes a pronouncement.
Before Lulu could re-engage, Fred made a pronouncement which still makes me chuckle. He declared, “Oh, Brenda! Fido and Lulu could never play together. I’ve raised Fido to be a confident dog, and Lulu clearly couldn’t handle his confidence. Fido will not be a good playmate for Lulu.”

With that, Fred and his student-puppy walked away (confidently, no doubt!). Fred later reinforced his message to me in an email.

Fred believed he was doing the right thing. He knows a lot about dogs, so perhaps he saw a true flaw in Lulu.

But I believe it’s equally possible Fred was making a move so common, we have a name for it: shutting them down.

Let’s let Fred’s actions train us all.
You want to bring out the best in the people around you, right? If so, Fred set the table perfectly to understand how you can accidentally do the opposite.

Life imitates art.
One of the better known stories of Greek mythology is the story of Pygmalion. The basic story-line is that Pygmalion, a lonely sculptor living isolated on an island, sculpts an ivory statue of a woman. He finds the statue, Galatea, so perfect that he falls in love with her. Eventually, the goddess Aphrodite brings Galatea to life.

Thank goddess!!! Goodbye loneliness!!!
With his own hands, Pygmalion had created his perfect companion, and he was in love. He no longer needed anyone else to keep him company.

Let’s set aside what may seem a strange/troubling story-line from another era and, instead, extract its wisdom. Like any good story, many lessons could be drawn from it. One of the common insights is about the relationship between a creator and what they create.

Bottom line, creators often fall in love with their creation, loving it more than everything else they encounter. That also means they love it more than anyone else’s creation.

You’ve experienced this yourself, haven’t you?

It’s possible they were right, that their ideas, kids, and people were always superior.  Yet, it’s equally likely that this was the “Pygmalion effect” in action.

But let’s not throw stones.
Before any of us get all ‘judgy’ about people like Pygmalion and Fred, you and I could make the same move as a leader—maybe even as a partner, parent, or friend.

Pygmalion helps us better understand the old saying, “people commit to what they create.” Of course they do! If they created it, they’re going to feel a creator’s love for it.

This matters more today than ever.
In the fastest-moving and most diverse world that’s ever existed, the problems to solve are becoming more interconnected and ambiguous. The best solutions for such difficult problems rarely come from a single sculptor. They’re the blend of many contributing creators iterating together over time.

Loving your creation is a great thing!
But when loving your creation means you shut down others, you’ll likely put your outcomes behind the curve. Meanwhile, the collaborators and seekers who are open to the creativity of others often build something even more robust, applicable, and resilient.

Pygmalion lived alone on an island. The rest of us do not.
The fastest way to the better solution is almost always to seek out the other creators in your midst.

Just remember, whether it’s yours or theirs, we love the things we can see our paw prints on.

Your next big idea…
Sometime soon, you’re going to run at someone with a puppy’s excitement with an idea. If they shut it down, remember, they probably don’t hate it. They’ll just love it more if they feel creative ownership in it.

And be prepared.
Someone will soon race at you with an idea like Lulu ran toward Fred. You may not like the style of their approach, just as Fred felt toward Lulu. Still, they may help you sculpt something more elegant and beautiful than you’d have ever imagined alone.

Whether it’s your idea or someone else’s, you might just unleash more of the best in people with more puppy and less Pygmalion.