The Olympic Games kick off this week. Be selfish. Watch them. You will be better for it. Do you know why?

Catch the Champion virus.
While people are talking about the Zika virus in Brazil or complaining about the pollution in the water, Olympic athletes are focused on their goal: to win a Gold medal.

Being a champion is all about overcoming obstacles. Zika, dirty water, and other problems are just the next obstacles they’ll encounter.

One word differentiates Olympians from the complainers and worriers.
GAMES. Olympians are playing a game and they know it. It’s the Olympic GAMES.

When you play a game, you expect to face obstacles, right? In fact, without difficult obstacles, you wouldn’t play. And no one would watch.

Obstacles are what keep us playing games.
Soccer is interesting because you can’t use your hands. The balance beam is riveting because you have to do all of those crazy flips on a board a few inches wide.

Fans and players flock to where the obstacles are the greatest.

Without extreme obstacles, there would be no extreme performance. Obstacles inspire the athletes to get creative, to work harder, to try new things.

From impossible obstacles erupt outrageous feats no one on earth has ever accomplished. 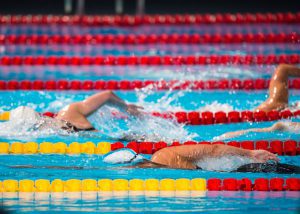 Think like a Champion.
Everyone faces obstacles, but we have a choice about HOW we face them.

Champions view obstacles as the CHALLENGE they will face and overcome. Average folk view those very same obstacles as a THREAT they must grind against.

These aren’t just words. How your brain fires and your blood chemistry changes is driven by whether you’re in challenge or threat.

Which mindset drives you?
Look at those big, gnarly obstacles you’re staring down right now. And just ask yourself whether they’re a challenge or a threat to you.

Be honest with yourself. Do you need a shot of the Champion virus?

The Champions Clinic (aka, Olympic Games) opens for business on Friday. Tune in early. Tune in often.

Then be a carrier and take it back to work.

I’m launching the Mind to Win ONLINE program in September. The last round of participants definitely brought home the Gold with extreme results! Mind to Win is another great way to catch the Champion virus. Want to know more? Let’s talk about those gnarly obstacles that stand in the way of your next championship.